Bede Gaming is a small British company with its headquarters in the north east of England in Newcastle Upon Tyne together with satellite offices in Bulgaria and London. In fact, the Bede bingo network isn’t actually owned by the company, and until 2018, its operator was Intellectual Property & Software Ltd. Today, it is owned by Leo Vegas, one of the biggest and best-known casino operators.

Originally founded relatively recently in 2012, Bede Gaming was established by a team with a long history in the industry. Some of the people behind the brand had been working in the online bingo sector since its infancy and therefore brought the considerable experience into the business.

Bede Gaming actually only offer bingo as a minor component of their business. Their primary product is a back end one – the BedeHUB open platform which allows bingo sites operated with Bede software to offer an extensive selection of promotions and slots titles. Some bingo sites which have run on Bede’s open platform actually offer bingo from other suppliers and not Bede at all!

*You can learn more about different bonuses by clicking on “Play Now!”. T&C’s Apply!

Is Bede Gaming A Reliable Choice?

The Bede bingo network sites are all fully licensed and regulated by both the Alderney Gambling Control Commission and the UKGC for the players’ peace of mind. As an added advantage, this operator is one of just a few to have an ISMS (Information Security Management System) in place which is ISO 27001 compliant. This ensures that players’ personal data is extremely secure and GDPR compliant.

What Should We Know About Bede’s Bingo Software?

The bingo software utilised by the Bede bingo network has been presented with awards for its high quality in the past, including the EGR Bingo Supplier of the Year accolade. However, it is still only powering a few sites including BingoStars and Mecca Bingo. The software has been specifically designed to be flexible and versatile, so operators using the platform have complete freedom to utilise the features which best suit their own and their players’ needs.

One of the reasons why the Bede network isn’t better-known lies in the Bingo Godz fiasco. The second site to join the Bede bingo network, this site turned out to be an expensive large-scale flop. When it closed down in late 2018 after struggling along for five years, it was known as one of the biggest disasters in online bingo’s illustrious history.

The reason for Bingo Godz’ failure lay in its attempt to bring complex gamification into online bingo. The concept was good but was poorly executed since players weren’t keen to spend time on collecting rewards so they could level up and gain access to higher priced bingo rooms with better prizes. Unfortunately, the gamification product wasn’t completely ready on the launch date and this only led to further problems with the site.

However, the biggest software-related issue that led to the downfall of the site was its lack of any 75 ball bingo games. Only 90 ball games were available at first, and then when 75 ball games were introduced, they didn’t follow the usual format and weren’t popular with many players.

Sadly, the failure of Bingo Godz has severely impacted on Bede Gaming’s expansion across the online bingo sector.

Unfortunately, the Bede bingo network game portfolio is quite limited when compared with many of its rivals. Its bingo offerings are somewhat lacking in variety, and this is another reason why this network has not expanded. Bede is focusing more on its other online gaming options rather than bingo, and this shows in the range of titles that it can offer. The provider does partner with some big-name slot providers, however, like IGT, NetEnt, Eyecon and Microgaming and there are some very popular video slots’ titles found on Bede bingo network sites including Fluffy Favourites and Cleopatra.

One of the areas in which Bede Gaming has always excelled has been in its mobile gaming software. Even from its earliest days, Bede’s software was developed with the needs of mobile device players in mind and Flash was never used by Bede. Having been HTML5 based from the start, Bede had an advantage over many of its rivals when Flash support was withdrawn by many browsers. Players who choose the Bede bingo network can be confident that they will be able to access all of their favourite gaming titles from any type of device and any kind of internet browser no matter where they are.

What Should Punters be Aware of About Bede Bingo Network Sites?

The Bede bingo network is one of the smallest bingo networks out there with a very British and localised feel. After the initial launches of Bede sites, there were no further launches for a considerable time. While the network did run Big Link shared bingo games, these were never big enough to offer enticing prize money and so weren’t popular with punters.

Nevertheless, in 2017, some sites which had already been using the flagship, Bede, back end product paired with Virtue Fusion bingo software migrated to Bede’s bingo product. This led to more changes including a popular jackpot game worth £5,000 which has raised the profile of the bingo network. Yet when Leo Vegas acquired the network a year later in 2018, the shift was put in place away from a focus on bingo and towards online casinos, albeit with bingo as one of its offerings.

The Positives and Negatives of the Bede Bingo Network

If you’ve been wondering if it’s worth registering with a Bede bingo network site, being aware of the positives and negatives is important. 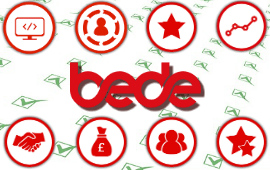 For players who are looking for bingo as only part of a wider range of online gambling and casino offerings, the Bede bingo network may be a good choice. Although it is a smaller provider than many of its rivals and has a more limited range of bingo games and proprietary titles, its flexible and innovative software allows its operators to adapt their offerings to suit their individual needs and requirements.

As the Bede bingo network is also fully licensed and regulated by two of the biggest names in the betting industry, players can rest assured that they are well protected in the unlikely event of a problem. Thanks to the ISO 27001 certification, which is something that very few software providers have at present, players have an extra layer of protection and even greater peace of mind when choosing a Bede powered site.

Players who prefer to play from their mobile devices are also onto a winner when they choose a Bede bingo network site. Having been built on an HTML5 base from the very beginning, Bede’s sites are already ahead of the game when it comes to mobile optimised gaming, and all titles can be accessed with ease from any type of internet-enabled device and any kind of operating system allowing for convenient play on the go at any time.

While the Bede bingo network offers some advantages, for dedicated fans of bingo, it probably isn’t the best choice. This network is more suited to those who prefer a wider variety of offerings with bingo forming just a part of them.